In January 1981 was created the non-profit organisation "National Ichthyosis Foundation" thanks to the initiative of a parent whose daughter was affected by lamellar ichthyosis. Indeed, the former began mobilizing the specialists (researchers, dermatologists) involved in the disease and determined to improve its access and its treatments. The foundation’s activity, started in San Francisco and now carried out in North Carolina, focuses on education, formation and services offered to its members including patients and their families. In 1989, the scientific and medical council considered that most of the disorders of keratinisation could be related to Ichthyosis, which led to the decision to expand the foundation’s activity. Consequently, the "National Ichthyosis Foundation" became the "Foundation for Ichthyosis & Related Skin Types, Inc.® (FIRST)". 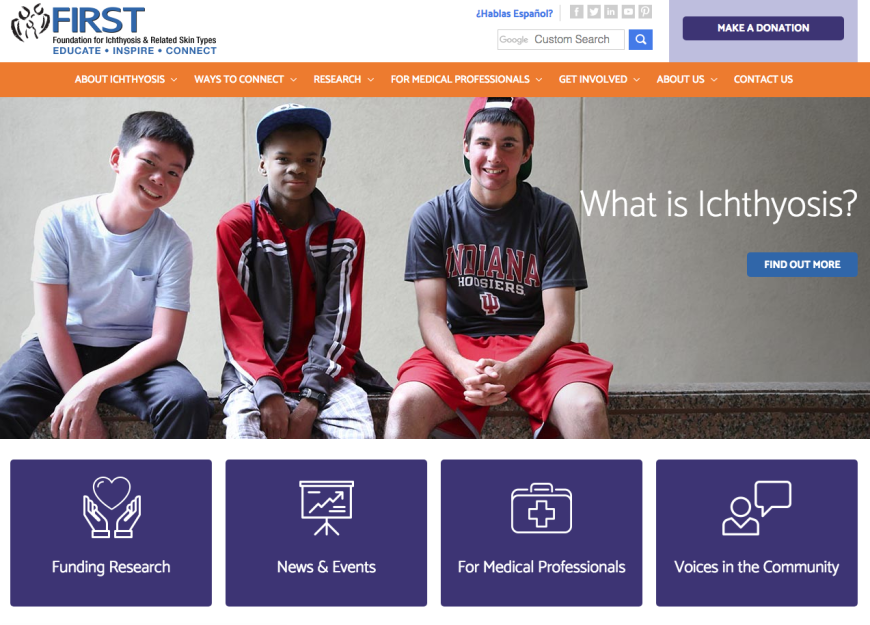 What is an Ichthyosis?

From the greek word "ichthys" meaning "fish", this term refers to a rare genetic disease affecting mainly the skin, diagnosed at birth. Permanent in most of the cases, it is characterised by a dry and rough skin, but also an excessive amount of dead skin pellicules (scales) which are continuously falling off the epidermis. More or less severe, this disease is the cause of inflamed, thick, cracked and sometimes blistered skin.

Ichthyosis stems from a genetic and monogenic abnormality (for each type of ichthyose, there is an abnormality on one gene). Indeed, the genes involved code for proteins which are essential to maintain healthy skin, mainly by avoiding anomalies of keratinisation. The identification work to determine the genes responsible for the disease, still in process, enabled to count approximately 10 dysfunctional alleles.

Due to the foundation’s policy, but also the members’ demands, research is the first beneficiary of collected funds. Through the funding of the "Dermatological Foundation" as well as the launch of a research award program since 2006, the foundation intends on strenghtening and promoting investigation on the cause and treatments of the disease. The last granted project, started in 2016, is that of Dr. Christopher Bunick from Yale University, who benefited from 50 000 $ for one year. The latter owes its success to his X-ray crystallographic analysis of keratins 1 and 10 to determine the structural mechanisms of ichthyosis-causing mutations. Furthermore, FIRST has an active patient recruitment policy to constitute a helpful database for researchers or get study participants.

The foundation’s commitment to the patients does not prevent it from focusing on health care professionals. On the one hand, an informative website for the general public, meeting places and biennal conferences for patients shape the members’ or general public’s activity. On the other hand, educational videos, databases and contact specialists support any practitioner facing someone affected by the disease.

Since the publication of a study conducted by the "Centre de Référence des Maladies Rares de la Peau de Bordeaux-Toulouse" in 2012, around 865 individulas have been reported as Ichthyosis sufferers in France. As for the United States, the disease annual incidence ranges from 5 to 9 people out of 100.000 depending on the calculation method used, according to a JAMA Dermatology study led between 2001 and 2010. Regarding the treatments, there is currently no medication able to act directly on the cause of the disease, whatever the forms. The only available cures help to treat skin flakes and improve epidermis aspect and comfort. These may include health cures, systemic treatments (pills or tablets) or local treatments with ointments, cream etc.. For more information, please consult the aforementioned website.