’Life with Epidermolysis Bullosa’: a reference book for all those concerned by the disease

Designed both for patients and practitioners, Life with Epidermolysis Bullosa, written by Professors of Dermatology Jo-David Fine and Helmut Hintner and published in 2009, deals with the treatment of the skin disease itself and its many extracutaneous. complications. 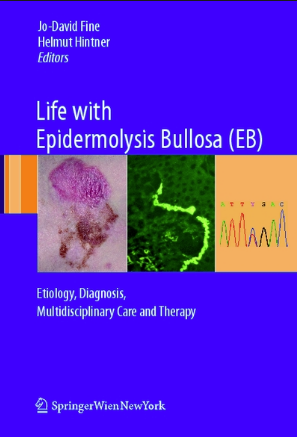 In the past few decades, many health care professionals became increasingly interested in and involved in the daily care of individuals suffering from Epidermolysis Bullosa (EB). Indeed, major advances in the therapeutics of EB have enabled many children to survive until adulthood, even those with the most severe forms. As a consequence, EB is no longer uniquely treated by dermatologists and pediatricians, but also nearly all medical practitioner, which makes the management of the disease all the more sophisticated. Given that new complexity, any practitioner can play a prominent part and multidisciplinary care has become the norm. The creation of EB-Haus, an independently funded hospital unit dedicated to the multidisciplinary management of EB children and adults, reflects this evolution.

Besides, more and more advancements in data collection were observed. This has given the researchers the opportunity to get improved insights into EB at the clinical, epidemiological, cellular and molecular levels. Today, specialists know prevalence, incidence, natural history, risks of complications and range of manifestations for each major EB subtype. These improvements and the rise of new information explain why the creation of such a book became a necessity.

An enthusiastic response in the medical field

This review by dermatologist Kenneth B. Gordon, written in the New England Journal of Medicine, is an example of how the book was well-recognized in the scientific community: "In Life with Epidermolysis Bullosa (EB), the authors seek to create a work that is accessible both to clinical professionals and to families. In order to be useful to such a broad audience, the book must function on multiple levels. In this complex task, the editors and authors have succeeded nicely. The first section of the book is a clear description of the genetics and pathophysiology of epidermolysis bullosa. [...]. The authors clearly and comprehensively describe the most recent findings and include a review of the recently updated classification scheme. [...] Nonspecialists will find these illustrations particularly helpful in visualizing the variety of clinical presentations of epidermolysis bullosa and its effects.". Dedee Murrell, dermatologist and reviewer for the Journal of the American Academy of Dermatology, is not less flattering : "The articles on the diagnosis of EB and molecular techniques are particularly well explained. [...] Particularly when Fine is the author, the text is very precise and a pleasure to read. The plentiful color images are excellent examples, particularly in the sections on eyes and teeth." The only cloud in the horizon, according to the doctor, is the regret that "the classification section written before the new classification, published in the JAAD in mid-2008, had been agreed upon". "In summary, if you are a dermatologist or clinician who encounters patients with EB—or any genodermatoses—this book is a must-have.[...]", Murrell concludes.

"The greatest strengths of this book are the chapters on clinical aspects of epidermolysis bullosa. They range from genetic counseling to the psychosocial effects of the disease. In these chapters, the authors synthesize data from prospective registries of patients with epidermolysis bullosa. These registries have succeeded to a great extent because of the efforts of Fine and Hintner. [...] In summary, this book is the editors’ effort to create a universal resource for those who are confronted with epidermolysis bullosa. Caring for patients with this disease requires the contributions of many distinct but commonly focused team members. Life with Epidermolysis Bullosa (EB) gives them all a place to start.", Kenneth B. Gordon asserts.

The book explained by its authors

In order to explain at best the purpose of the book, here is how the authors describe it: "The goals of this monograph are several-fold. First, our co-authors have attempted to meticulously summarize the clinical literature pertinent to EB so as to better educate healthcare workers and patients about diagnosis, classification, surveillance, and management. Whenever possible they have made recommendations, based on their experiences and that of the published literature, as to how best to approach and treat patients with this disease.

Second, the research literature has been comprehensively summarized, so as to more clearly explain how this disease arises at the level of the gene, and how those mutations result in dysfunctional behavior by cells within the skin. We hope that this monograph will serve as a valuable primer for those who are not yet intimately involved in clinical care or bench research on this disease, and that it will stimulate new ideas and approaches that will ultimately lead to improved care and eventually the cure of all patients with inherited EB.".