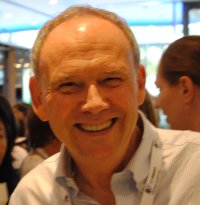 John Dart is COO of DEBRA International, a worldwide network of national groups working on behalf of those affected by the genetic skin blistering condition epidermolysis bullosa (EB). He answered a few questions about his involvement in Debra International and on international cooperation in the field of rare skin disorders.

How did you come to get involved in Debra International?

John Dart: I founded DEBRA Europe, together with colleagues from DEBRA France, in 1992 and we subsequently became DEBRA International to reflect the actual membership of the association which has always been greater than just Europe.

We founded the association, which represents national EB patient support groups, because we were very aware that, as a rare condition, bringing together a critical mass of patient groups could achieve more than each group working alone.

What is the added value of your organisation when it comes to the care of those patients?

John Dart: DEBRA International acts as a vehicle to enable national patient groups to work together for the benefit of the people living with EB that they represent. Over the years DEBRA International has developed into a central point of contact between patients and clinicians, researchers, industry and decision makers.

The coordination of patient-funded research has been important in working with researchers to develop the basic science to understand the nature of the different types of EB and to provide the funding for preclinical research and early stage clinical trials.

Support has been given to national EB patient support groups to work with clinicians to develop national Centres of Expertise. In some cases, such as in the UK and in Austria to name just two examples, the national patient group has provided significant funding to allow these centres to be established and to prove their value to government.

Access to information is a crucial element in enabling patients to access high quality care. DEBRA International provides information through its website and other publications and individualised help through its EB Without Borders project.

A series of best Clinical Practice Guidelines have been published, or are in the pipeline, on specific topics of importance to people with EB, such as dental care, pain management, cancer management and nutrition. These guidelines are produced as a joint initiative between DEBRA International and leading clinicians.

According to you, what can the patients expect from the future European Reference Networks?

John Dart: No one country or health care system has a monopoly of expertise in the care of patients with specific conditions. This is particularly true in the case of rare diseases, such as EB, and national Centres of Expertise will have different strengths and interests. European Reference Networks will formalise the networking between Centres of Expertise and will have many benefits for patients. Amongst these are access to cross-border healthcare where specific treatment facilities do not exist in the patient’s home country, access to a bigger group of patients for participation in clinical trials, and the development of international guidelines of best clinical practice and the levelling up of standards and expertise.

EURORDIS, which played a major role in advocating for ERNs in Europe, strongly believes that patient organisations must be involved in all levels of management of ERNs so that the patient voice is heard in decision making. DEBRA International shares this view.

John Dart: DEBRA International strongly supports the ERN for Genodermatoses. Whilst the ERN will have a very large group of conditions within its area of responsibility, it is the only feasible way to move forward. There will not be sufficient funding to create stand-alone ERNs for specific conditions and, if this route were to be followed, ERNs would only be established for the best resourced or most politically influential conditions. The ERN for Genodermatoses will draw on the strength of existing disease-specific international clinical networks, such as EB-CLINET, but will have to show a commitment to all genetic skin conditions and the improvement of facilities over time to the level of the best.

The development of the ERN will be step-wise, it will not be possible to do everything at once on day 1. In my view, the early priorities should be i)to maintain the strength of existing networks and, using that strength, to seek to expand the number of conditions where there is strong clinical interest and active patient groups, ii) to establish strong governance, management and networking structures, and iii) create the infrastructure to support clinical trials, such as registers.

Why does international cooperation beyond Europe matter so much?

John Dart: Europe is traditionally strong in promoting cooperation in healthcare and the European Union has done a great deal, particularly in the field of rare diseases, to foster cooperation. However, expertise is not confined to Europe. The USA must be an essential partner in any international network and we are seeing an enormous growth in influence in other countries, for example China where massive investment is taking place. The ERN will be so much stronger if it can draw of the expertise of countries outside of Europe.

The other websites of the foundation